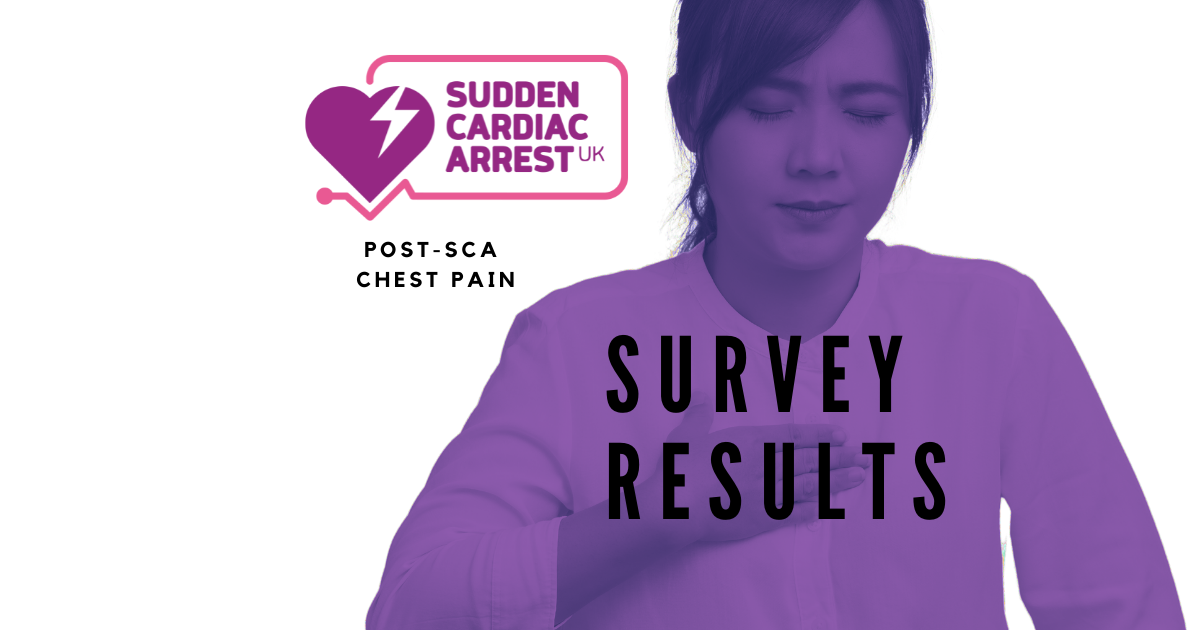 Being resuscitated is something that the patient is usually totally oblivious to, and whilst the ramifications of the event can be long term, often the first indication that you have been through something is when you regain consciousness and notice pain your the chest.

Of course, if you have received major heart surgery it’s certainly due to that, but otherwise, it’s likely to be the result of having received life-saving CPR.

It’s not uncommon to hear of survivors talking of the broken ribs that they sustained, and whilst I’ve no doubt they would rather have that than the alternative, the pain can be an unsettling experience. It may seem obvious that getting a pummeling to the chest for some minutes will lead to pain, but as stated above, when you are receiving it you are unconscious and when you wake you will most likely have no memory of what took place and consequently the pain can lead to anxiety, thinking that maybe another SCA is imminent.

From anecdotal evidence, it seemed that more information and research is needed and so we developed a short survey to investigate survivors’ experience of post-CPR chest pain.

The results of the survey along with some brief thoughts are shown below.

A Google form survey with 18 questions was advertised via the Sudden Cardiac Arrest UK public Facebook Page, the private Group, the international groups and on Twitter.

We asked those that had multiple cardiac arrests during the same “event” to accumulate any timings. For those that have had more than one separate SCA, we asked them to only refer to the first time they received CPR.

There were 2 demographic questions on Age & Gender and they showed that of the responses 59% (151) were female, 40.6% (104) male and 0.4% (1) non-binary. This contrasts with the general population of sudden cardiac arrest survivors where the gender split percentages are reversed. One can only posit that the discrepancy is because of the bias inherent in users of social media platforms such as Facebook.

Q: Prior to your SCA did you have angina?

We checked to see whether respondents had experienced chest pain (Angina) before their cardiac arrest to help understand any post-arrest symptoms.

Q: What was the diagnosis of your SCA?

Q: What was your approximate downtime:

Downtime refers to the time from the person collapsed until they had a return of spontaneous circulation (ROSC).

Q: What was your approximate CPR time?

Respondents were asked to approximate the number of minutes they received CPR for.

Q: Who did you receive CPR from?

Respondents were asked to select all options that applied. We defined a layperson as someone who does not have regular professional CPR* training. *Periodic 1st Aid training does not count.

Q: What treatments did you receive?

This question was asked to determine whether any other treatment factors could be causal factors to the patient’s chest pain.

Q: Do you have angina?

This was asked to determine whether angina could be a factor in the patient’s chest pain.

Q: Were you given any information about post-CPR chest pain or told what to expect?

Anecdotal evidence suggested that many leave the hospital without much information as to what to expect post-discharge, both as a survivor and any chest pain. The responses show that disappointingly less than 1/3 got any information.

Q: Did you have post-CPR chest pain?

It can be seen from the responses to this question that perhaps unsurprisingly, as a result of receiving CPR the patient should expect some chest pain/discomfort afterwards.

Respondents were asked to use short sentences or phrases to briefly describe how their chest pain felt. The responses have been analysed and grouped into common phrases or themes.

Q: How long did your pain last?

As can see from the table below the most common time frame for post-CPR pain to last is between 1 & 3 months with almost a third selecting this. Just over 1/3 said their pain had gone within 4 weeks and 2/3 by the 3-month mark. Almost 14% said that their pain lasted longer than a year and 4.3% had pain that was ongoing or intermittent (variable time frames).

Q: Were you diagnosed with the following?

This optional question received 220 responses and allowed respondents to select from a range of options that applied to them – including adding their own (other). 36 did not give a response and 14 gave a negative response to receiving a diagnosis.

Q: Were you given any treatment for the pain?

Q: If you were given treatment, what was it?

We received 136 responses to this question and the overwhelming treatment was painkillers of some sort – which is perhaps unsurprising as there isn’t a great deal else you can do for bruised/cracked/broken chest anatomy. It was interesting to see that some respondents received additional help from physiotherapy and occupational therapy.

For further information on treatments for broken ribs check out this article.

We gave participants a chance to offer up any advice for others going through a similar experience and for any final comments.

Q: Do you have any advice for other experiencing post SCA chest pain?

From the 168 responses, there were many common themes within the advice and they have been summarised by the representative answers below:

Q: Any other comments?

So there you have it, our little survey on chest pain. We hope you find it useful and if there is interest we may develop some more resources from it.

Thanks go to all those who took part in the survey – getting feedback like this can be extremely helpful to others going through their recovery.

Please leave any comments you have below.